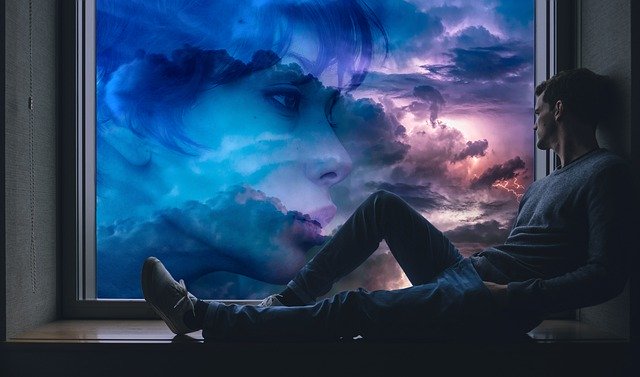 In October 2015, Beatrice one of our psychics, had a dream where she saw herself downstairs in her supposed-to-be fiancé’s house. She was standing at the bottom of the stairs. She already knew that the house was a magnificent luminous castle, with high ceilings, chandeliers brightly lit all over the place. It was elegantly decorated and gave a feeling of warmth and love. It was daytime because she saw the blue skies out of the windows and the beautiful gardens. This castle was located near a lake or an ocean because she remembered seeing a jetty and the blue water, prior to standing at the bottom of the staircase. Her fiancé was standing at the top of the stairs inciting her sexually to come up and be with him. He was doing it with his mind and she remembers laughing and telling him to stop it. But she could not help it, so excited sexually she was, she climbed the stairs and went into his arms. In bed, they had the most wonderful sex. She recalled orgasm after orgasm. The dude was absolutely great in bed. And then, she woke up.

In real life, Beatrice had no fiancé, had not been with any man for five years and so she could not figure out where this vivid dream had come from. She had been completely and totally celibate and therefore she thought that it was mirroring her lack of sex, as per psychologists.

Two or three days later, Beatrice developed vaginal sores. The labial itching and vaginal discomfort were so bad that she went to the store and bought herself both an anti-itch vaginal cream and vaginal tablets. The sores lasted for months until they finally went away, although she has had a left ovarian discomfort and mild pain up till today.

Beatrice stated that she realized she could not go to her doctor because he would not believe her. She shared the story with her brother who is a physician. He made fun of her and said only she would have such a dream and only she would face such an ordeal. Two of her sisters who are nurses thought it was an amazing experience but they had no explanation for its physical outcome.

On May 7, 2020, Beatrice had the same sex dream in the same castle. This time, her fiancé was now her husband and they were in bed together about to have sex. She had a sudden concern that the staff might be peeping at them, so she got up from the bed and went to open the door. She saw a woman and a man standing at a distance in the hallway talking to each other and so she knew that they had privacy. She went back to bed to join him while he was telling her that the two of them have all the privacy in the world because it is their house and it is their private island. He was all ready and able because once again they had great sex. He professed his love for her and stated that Beatrice does not realize how long he has loved her and how much he has suffered for not being able to hold her in his arms for so long. According to him, he has watched her, followed her, nurtured her, guided her, taught her, unbeknown to her.

Once again, in real life, Beatrice has no knowledge of this man, who he is or where he is. She is still unattached and celibate.

Most people do not recall their dreams at all, some recall them in small details and few can have a detailed account of their experiences. The reason for forgetting our dreams or for often distorting them, is because our dreams take place in different levels above the physical plane, either in the astral or in the mental. According to theosophists who studied Hindu scriptures, there are seven levels in the astral plane and seven in the mental. Now imagine the dream experience having to travel down through these levels in order to reach us in the physical in our awake moment!

As of July 28, 2020 when Beatrice shared her story with us, she did not suffer any medical consequence from this second sexual encounter. She stated that she did not pay much attention to these two dreams until she read in the news on July 28, 2020 about Dr. Stella Immanuel’s claim regarding endometriosis, cysts, demons’ sperm and so on. This doctor’s statements although they are very radical, may not be so far from the truth after all.

The invisible world is vibrant with entities. To be privy to it can be exciting, frightening, positive, negative, scary, disturbing, detrimental to our physical and mental health or it can simply be absolutely blissful. Only the receiver can attest to its legitimacy.

One thought on “Can sex dreams cause illnesses?”