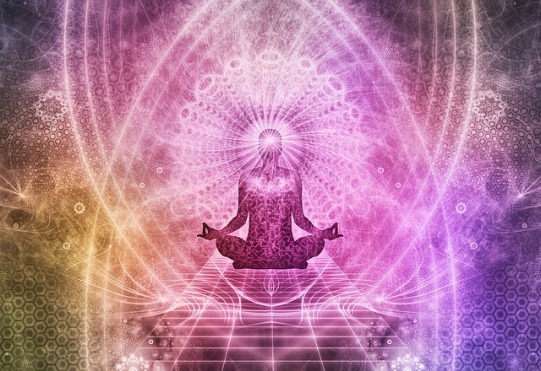 Here is the fundamental fact in a nutshell: The human aura is the great storehouse, or reservoir, of human magnetism, and is the source of all human magnetism that is projected by the individual toward other individuals. Just how human magnetism is generated, is, of course, a far deeper matter, but it is enough for our purpose at this time to explain the fact of its storage and transmission.

In cases of magnetic healing, etc., the matter is comparatively simple. In such instances the healer by an effort of the will (sometimes unconsciously applied) projects a supply of his pranic aura vibrations into the body of his patient, by way of the nervous system of the patient, and also by means of what may be called the induction of the aura itself.

The mere presence of a person strongly charged with prana, is often enough to cause an overflow into the aura of other persons, with a resulting feeling of new strength and energy. By the use of the hands of the healer, a heightened effect is produced, by reason of certain properties inherent in the nervous system of both healer and patient.

There is even a flow of etheric substance from the aura of the healer to that of the patient, in cases where the vitality of the latter is very low. Many a healer has actually, and literally, pumped his life force and etheric substance into the body of his patient, when the latter was sinking into the weakness which precedes death, and has by so doing been able to bring him back to life and strength. This is practically akin to the transfusion of blood—except that it is on the psychic plane instead of the physical.

But the work of the magnetic healer does not stop here, if he be well informed regarding his science. The educated healer realizing the potent effect of mental states upon physical conditions—of mental vibrations upon the physical nerve centers and organs of the body—endeavors to arouse the proper mental vibrations in the mind of his patient. Ordinarily, he does this merely by holding in his mind the corresponding desired mental state, and thus arousing similar vibrations in the mind of the patient. This of itself is a powerful weapon of healing, and constitutes the essence of mental healing as usually practiced. But there is a possible improvement even upon this, as we shall see in a moment.

The advanced occultist, realizing the law of action and reaction in the matter of the auric colors, turns the same to account in healing work, as follows: He not only holds in his mind the strong feeling and thought which he wishes to transmit to the patient, but (fix this in your mind) he also pictures in his imagination the particular kind of color which corresponds with the feeling or thought in question.

The above may sound a little complicated at first reading, but a little analysis will show you that it is really quite a simple process, acting strictly along the lines of Action and Reaction, which law has been explained to you in preceding chapters of this book. The vibrations rebound from mind to aura, and from aura to mind, in the patient, something like a billiard ball flying from one side of the table to another, or a tennis ball flying between the two racquets over the net.

The principle herein mentioned may be employed as well in what is called “absent treatment” as in treatments where the patient is present. By the laws of thought transference, not only the thought but also the mental image of the appropriate astral color, is transmitted over space, and then, impinging on the mind of the patient, is transmitted into helpful and health-giving vibrations in his mind. The healer of any school of mental or spiritual healing will find this plan very helpful to him in giving absent as well as present treatments. I recommend it from years of personal experience, as well as that of other advanced occultists.

Of course the fact that the ordinary healer is not able to distinguish the finer shades of astral color, by reason of his not having actually perceived them manifested in the aura, renders his employment of this method less efficacious than that of the developed and trained occultist. But, nevertheless, he will find that, from the knowledge of the auric or astral colors given in this little book, he will be able to obtain quite satisfactory and marked results in his practice. The following table, committed to memory, will be of help to him in the matter of employing the mental image of the auric colors in his healing work.

– The Human Aura by Swami Panchadasi | Courtesy of Project Gutenberg